Astro Reflections means as much as; reflect to astrology in relation to ourselves, other people, and the world in motion.

The word Astro has Latin as its original origin. The ancient Greeks derived the word from

The word Reflections has English as its original origin. The British, in turn, have incorporated the word into their language from the

The symbol of Astro Reflections (the two triangles, which slide into each other with the peaks from top to bottom ánd bottom to top) symbolizes the heaven and earth principle. After all, it is between this earth and heaven where we humans dynamically reflect on what “happened to us from above”, and “what that causes us below with two feet on the earth in life”. But perhaps more importantly; why. 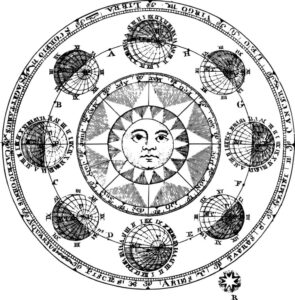 Classical astrology is therefore not a vague statement about ourselves and / or others and / or the world based on subjective preference. It has been objectively studied, developed, reasoned, controlled, and continued to evolve to the state of science and practice currently, like all other modern sciences that still play an important role in our modern world today.

Where would our healthcare be now, if Hippocrates wasn’t an astrologer?

Astro Reflections does not pretend to have “the wisdom and all knowledge”. On the contrary, this online platform was founded to: share the knowledge and / or developments in astrology (and related fields) back and forth with anyone who is genuinely interested in it and wants to communicate about it.

But more importantly ; will reflect and / or communicate with integrity about it, independently and / or collectively of free will.

Astrology through the ages

Western astrology, under the influence of the first Babylonian astrologers, +/- 200 BC. , originated in Greece in the Hellenistic period. Many of the Greek philosophers and great thinkers, the founders of today’s European civilization, were; philosophers, mathematician, physicist, astronomers and astrologers, and practiced these crude forms to a greater or lesser extent.

In the time period (+/- 300 BC) the Greek Euclid of Alexandria gave the world its geometry. This geometry was applied to the time and space around them, including the cosmos.

The Greek: oroskópio : horoscope astrology was born, and was added to the existing sciences: philosophy, mathematics, physics, astronomy. These astrological insights were also (enriching) applied to the other sciences.

Western European civilization is thus based on this important Greek periode. Some other great thinkers and practitioners of astrology (with the help of the geometry of Euclid, among others) before the era from Christ, up to and including mid 1600 in present-day Europe:

Great thinkers and scientists who recognized, and practiced the enriching classical astrology. Astrology has therefore always been a part of modern science and civilization as we still know it in Western Europe today, with thanks to William Lilly 1600 A.C.

Classical astrology was and is therefore one of the modern sciences in and out of our civilization. In fact, the Bible (the Gospel of Matthew 2: 1-12) speaks of the vassal king Herod the Great of Judea, and three wise astrologers from the East who were passing through Judea.

These three wise astrologers, who had already concluded the birth of Jesus Christ from their study of the stars, were to visit and pay tribute to him. They did this concretely by traveling in the direction of the star of Bethlehem, which thus indicated the birthplace of Jesus Christ to the three wise astrologers from the East along their journey. The rest is Christian history as we known it today in Western Europe.